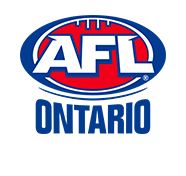 The Australian Football League Ontario is the oldest and most competitive Australian football competition in North America. The AFLO is a member of AFL Canada which is the representative body of the Australian Football League (AFL) based in Melbourne, Australia. The league was formed in 1989 and currently has 10 member clubs spread throughout Ontario. Each club recruits players from the communities in which they are based, and provides a competitive fun filled environment for people to learn a new sport and compete to the best of their ability.

The league is supported by generous donations from various community sponsors, and we encourage you to support them in return. The senior competition consists of a 14 round regular season with a finals series spread over 3 weeks concluding with the pinnacle of footy in Ontario, the Grand Final.